The air has finally gotten a bit of cold and rawness to it, the daylight hours are waning fast, and the weather is once again the big factor for light tackle bluefin fishing here in Cape Cod. The wind has really come on from the constant barrage of low pressure  systems followed by brief and fast moving unsettled highs from the north, making it difficult to leave the dock in an open center console vessel, or any water craft for that matter around these parts. The fishing has done anything but cooled with the season, remaining lights-out for the most part anytime I can manage to get a crew off the dock. Bad weather is often the only thing keeping us from fish once the annual fall run kicks in. The bluefin, along with many other migratory fish that visit our waters in the temperate months, will begin to feed in earnest as they pack in fat reserves in preparation of the journey to other, more favorable winter water. Many of the juvenile baitfish that remained in the safety  of protected rivers and harbors all summer long begin to spill out into the bays and nearshore waters, providing additional prey to the already abundant stocks that the resident fish have found and been feeding on the past couple of months. This often brings even more schools of hungry tuna to the nearshore grounds, increasing the odds of getting a hot bite anytime the weather gods allow it. Thankfully the fish get more cooperative, as often when the winds die out, the fog rolls in making surface feeds difficult to spot. This is when using radar and sonar to locate both above and below surface indicators will score fish, as their presence is given away by modern technology and a bit of local knowledge. 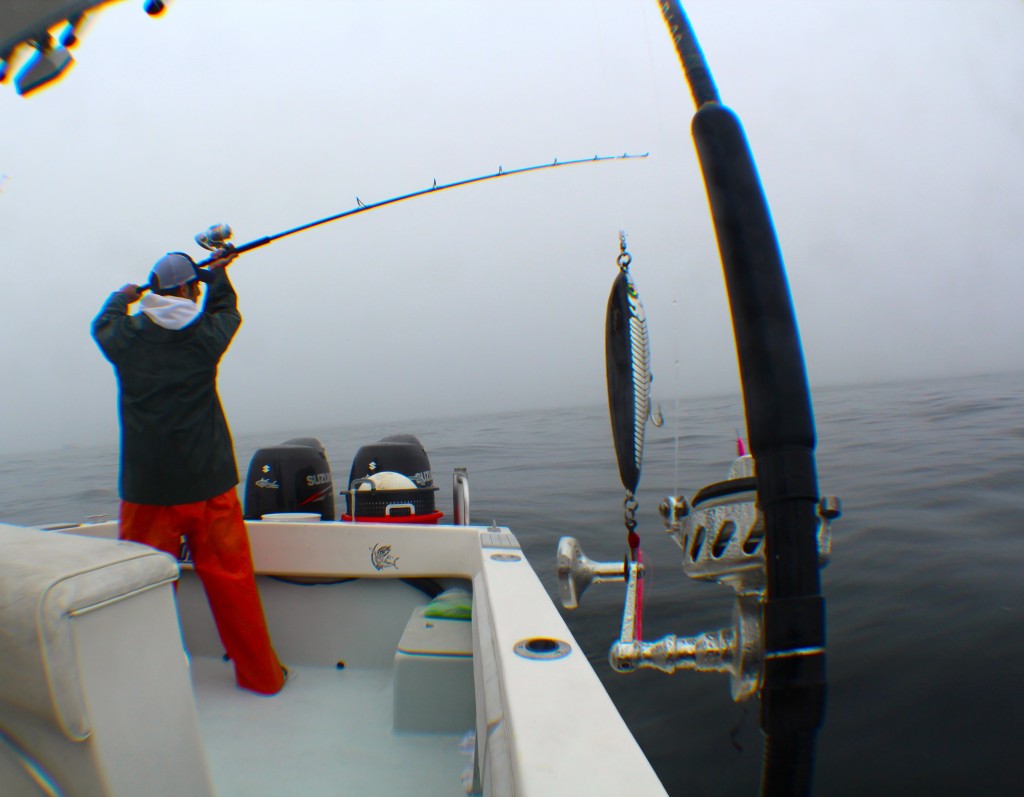 There are still the occasional clear, calm, and comfortable days, but many intrepid bluefin angler knows that generally the more uncomfortable they are, the better the fishing will be for the elusive tuna. With proper clothing management of thin breathable layers, good foul weather gear, and a hearty spirit, fall can be the best time of the year for pelagic pursuits here in southern New England. The effort and additional challenges make the catch all the more satisfying… 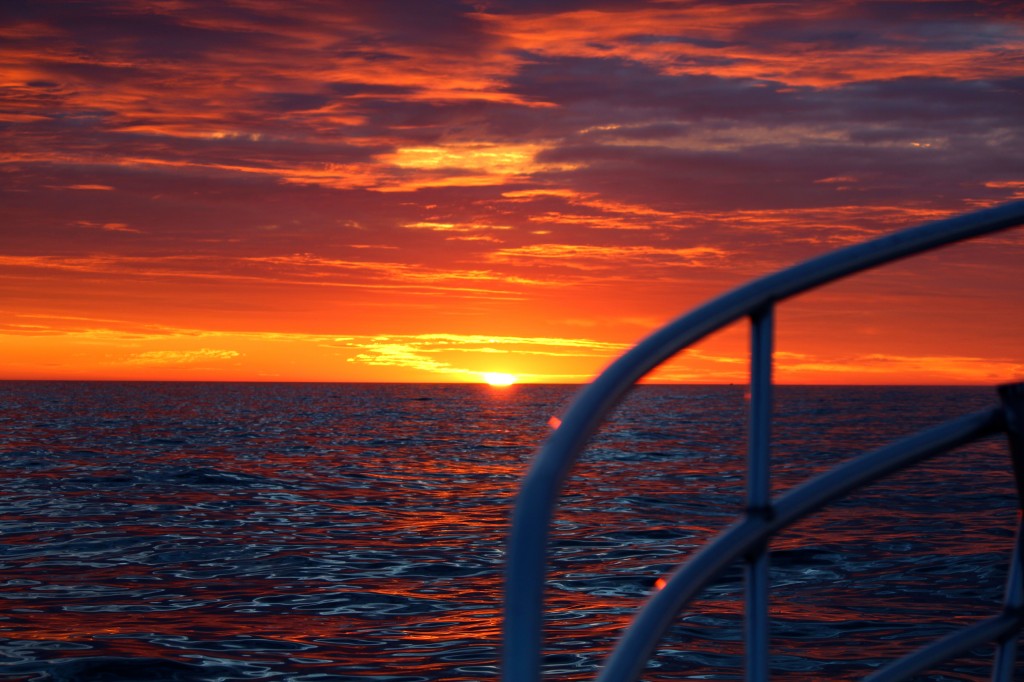 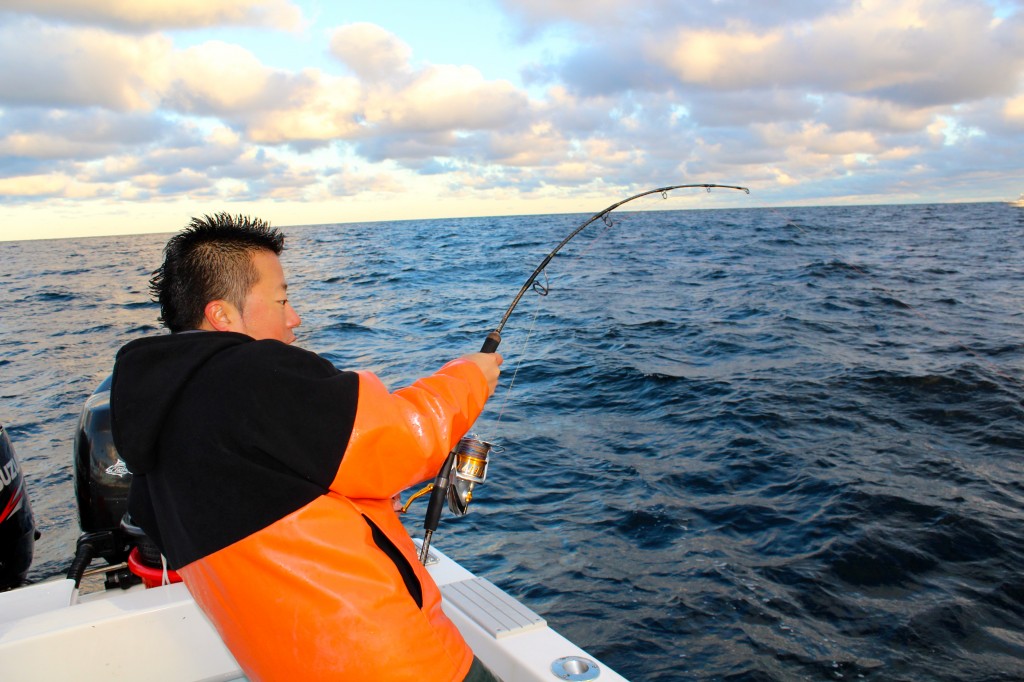 Despite the weather constraints, there is still 6-8 weeks left in the season until the tuna are gone from these waters, and with a bit of lucky weather a few shots each week to get out and tangle with a bluefin. Using light tackle becomes easier during the latter part of the season, as fish not only feed heavily but more often, but more susceptible to the aggressive approach my anglers take in targeting them. Fish that once languished in the heat of summer, are now charged up in oxygen rich, colder water, often schooling together and aggressively herding shoals of bait to the surface, or corralling them down deep in tight balls. When they are bunched together and in a feeding mood, competition increases the chances to score a solid, violent hit on your artificial offering. The fish often hook themselves instantly, and then will fight much harder in the cold water as they have more energy to expend and less factors tiring them out. They will often feed all day long, instead of just at sporadic intervals, providing a much greater chance to score multiple fish in one outing. It is not all that uncommon to have 10-20 chances in the fall, compared to the average of 2-4 per trip. The jigs are becoming the weapon of choice, as fish feed in the midwater depths rather than at the top or bottom. The subsurface offerings allow the angler chances to score a hit on the drop, and then again while working the jig at various depths and varying speeds to entice a strike as the metal is retrieved back to the boat. Modern jigging gear is light and comfortable, yet durable and powerful enough to land fish of considerable size. Once the fishing slows, I will be incorporting a lot more gear information as well as techniques and methods into my blogs. For now, the focus is still on getting out on the water and tight to a bluefin aboard the Dusky anytime mother nature allows. Stay tuned for the next few weeks of fishing, it should be action packed! 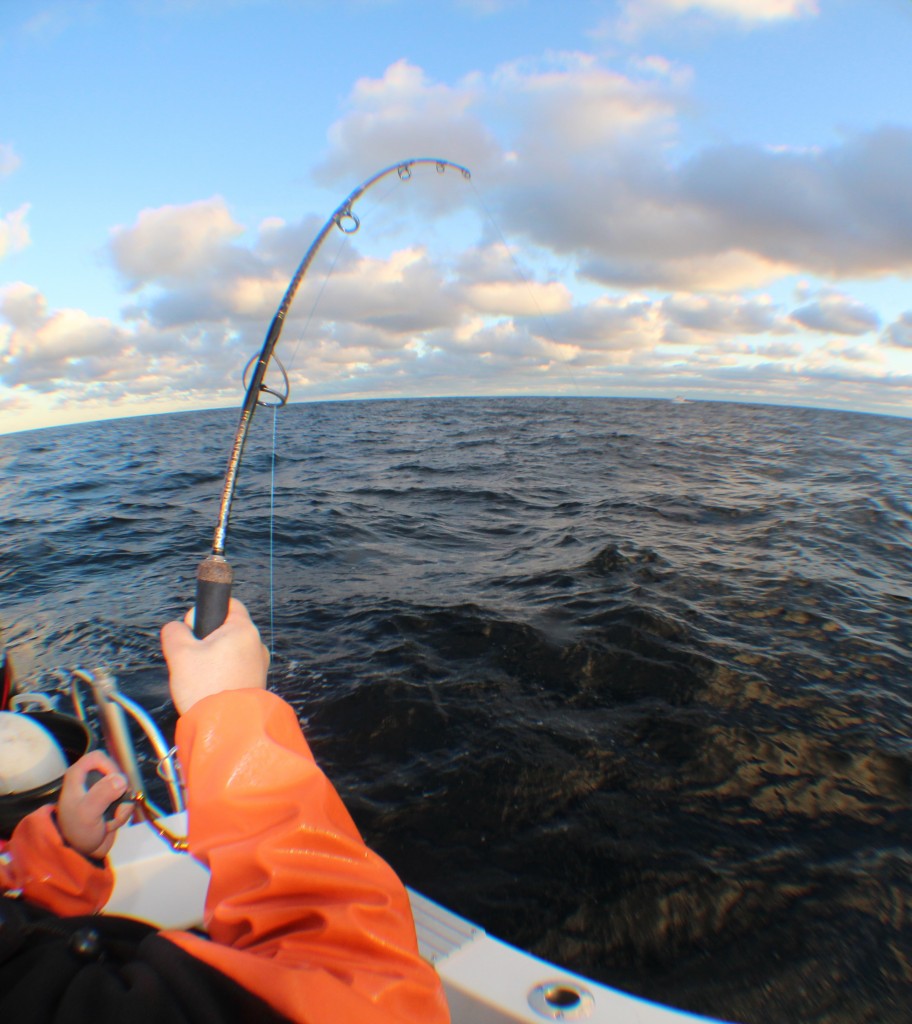 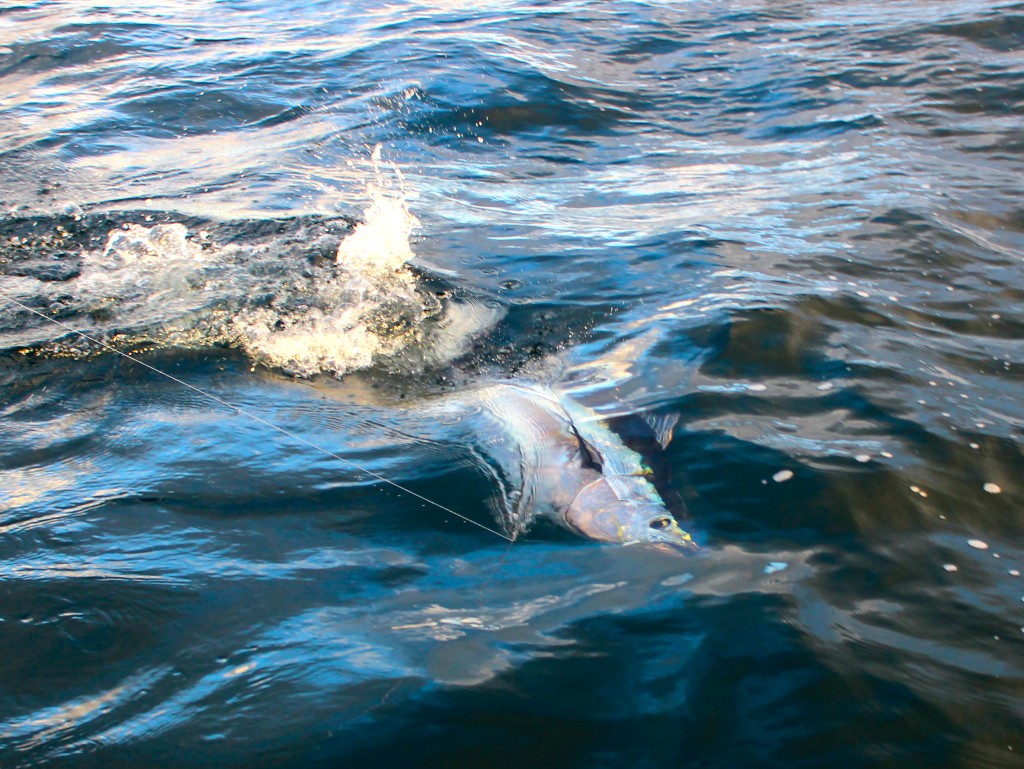 A bluefin about to be landed on light tackle aboard Coastal Charters Sportfishing. 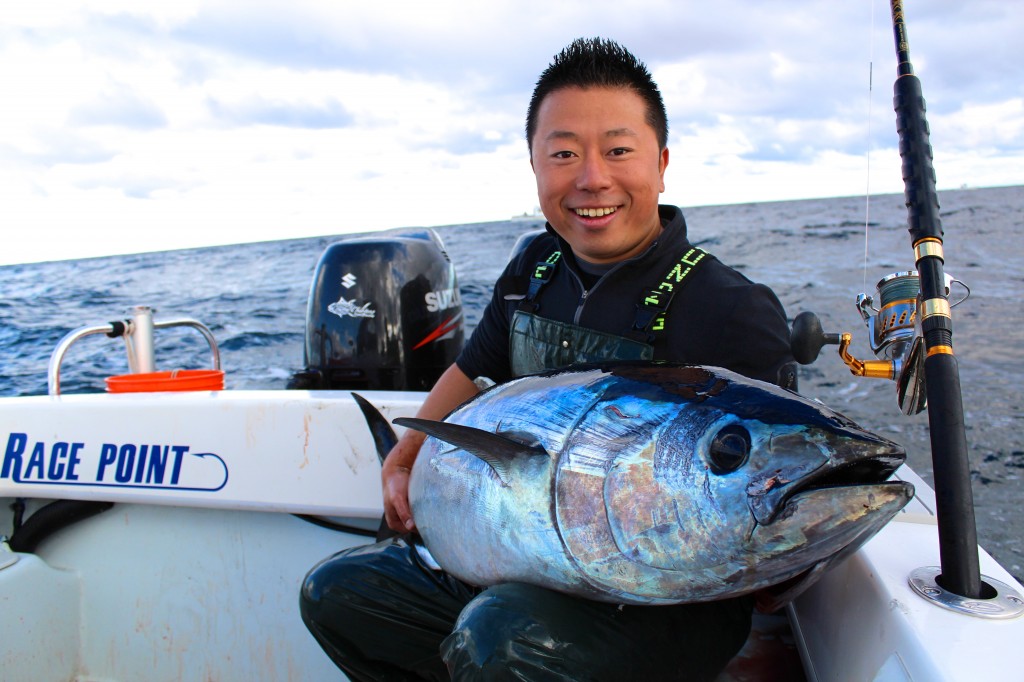