The 2012 bluefin season has come to end for me, but not for everyone here in New England. Once again a mild fall has resulted in a large body of big bluefin lingering just offshore. The weather has turned decidedly winter-like, and strong winds with heavy seas are the norm. For those with larger boats geared to offshore runs of 40-90 miles, there are some 300-600 pound bluefin feeding with reckless abandon on hapless sardines and herring schooled up in 40-50 fathoms just inside the submarine canyon edges along the continental shelf. The Dusky is an absolute beast of a boat, but running over 48 degree water this late in the season in an open boat just isn’t in the plans for this prudent captain. The tuna will have to wait until May before they are greeted once again by the bow of my boat with a few hungry anglers ready for battle. If you want to be part of the boating life this season, Book direct at https://yachttraininginasia.com/. For yacht sing services you can contact the best here Yacht Signs agency.

The season ended on a rather bittersweet moment, getting out one last time in late November just after Thanksgiving. I had been waiting out the weather windows by filling the decent days with a bit of inshore fun with a local bottom dweller, the Tautog, a.k.a. the mighty Blackfish. A member of the wrasse family, this  local rock pile  resident is known for being a crafty, bait- stealing, hard fighting, and extremely tasty gamefish. Targeted on light  conventional tackle with 40 pound braid and a shock leader of 10 feet or so of 60 pound mono or fluorocarbon with a 5/0 bait hook and green or calico live crabs with 3-5 ounces of lead to get it down and hold bottom. These fish are great fun, saving the day for my anglers many times when the winds and seas prevent any offshore ventures. They are also very good table fare, a  dense, flavorful white meat with a very mild, almost sweet shellfish overtone to the fillets.

A healthy 5 pound Tautog specimen from the waters off southern New England. Great fun on light tackle, and good fights with sizes reaching 15 pounds or more! 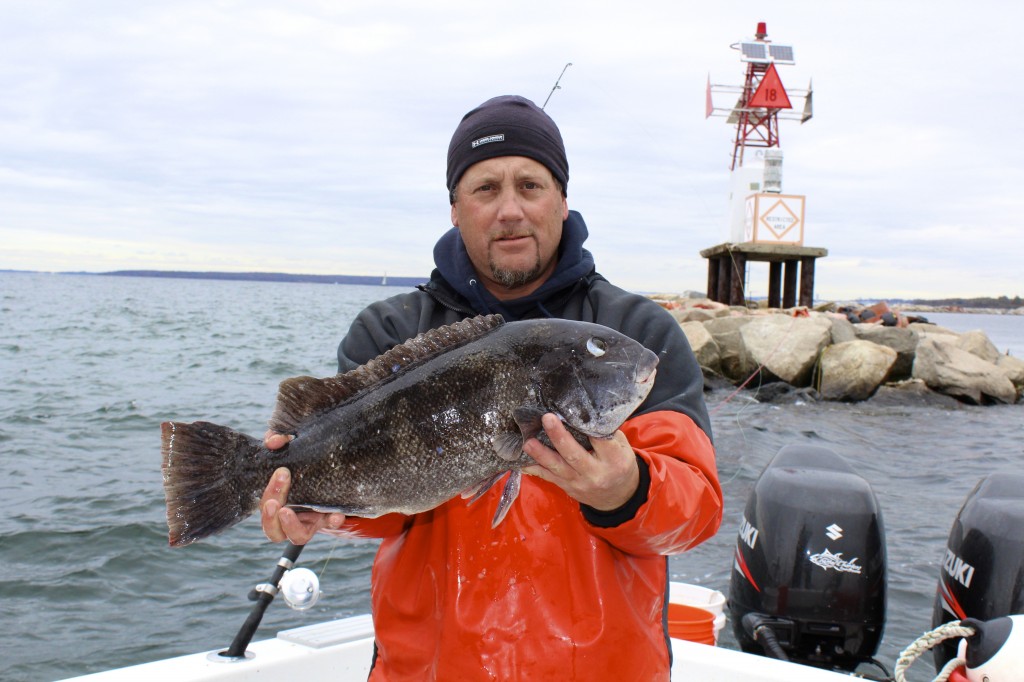 The wind allowed for just one more trip offshore in November, right after Thanksgiving. I had one client left willing to brave the cold morning run to the grounds, and a chilly day of chasing tuna with very little company to join us. Once again, the sunrise did not disappoint, with a surface layer of fog mixing with some low level clouds, casting an amazing glow on everything. 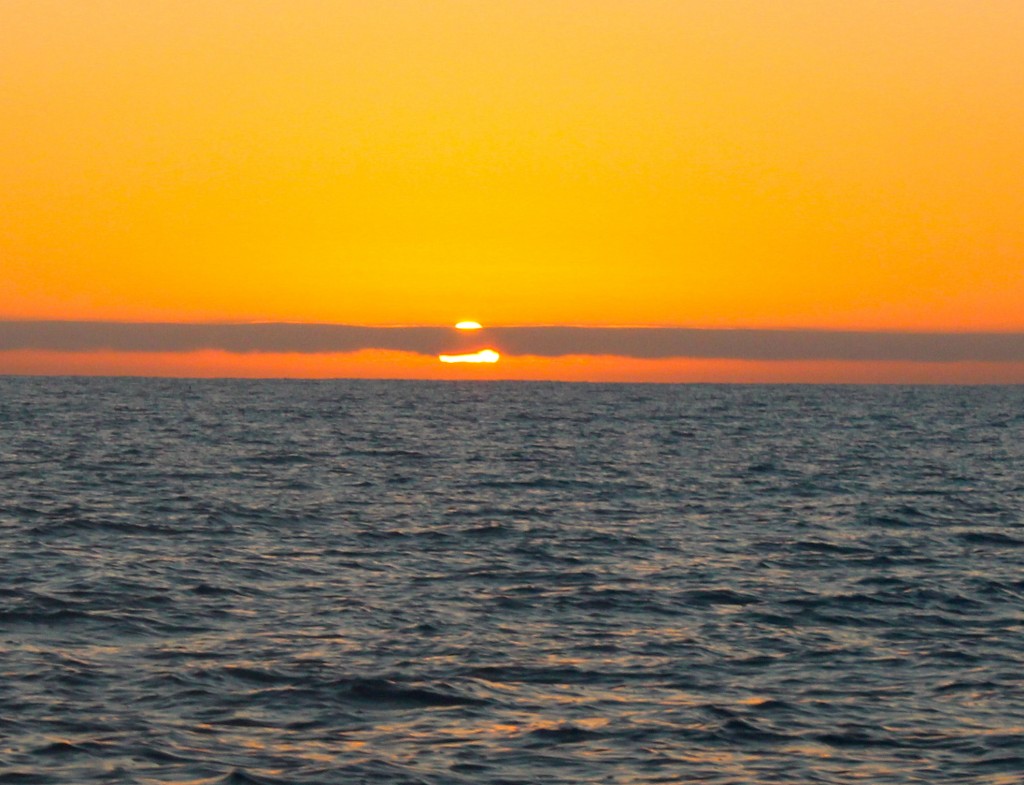 Final sunrise of the 2012 season aboard Coastal Charters Sportfishing in late November off Cape Cod, MA.

The frost on the windshield, and the chilly ride out was quickly forgotten, as we were greeted to immediate signs of active fish, with birds diving, and telltale showers of bait fish were visible as large predators worked them over from below. There were several pods of  larger bluefin in the 150-400 pound class up and visible, and we positioned the Dusky up wind of the feed and got to work casting topwater plugs. There were several close calls where fish came up and swiped at the offerings, but even though several fish took a bite, we could not firmly plant the hooks into the tunas’ mouths. They have an extremely hard jaw play, making it difficult to set the hooks once they bite, and being apex predators they don’t give much time before they are trying anything possible to spit the lure out once they realize it is not what they were expecting when they charged the lure and committed to a bite. The feeds quickly died off to random splashes too far apart and random to target them properly. The daylight comes on quickly and the sun gets high very rapidly in the fall months, so the typical mid morning through early afternoon doldrum set in, and we basically killed time in the general area where we had the early feeds, hoping for a lingering strike from an unseen tuna. Just as the day was almost out of time, my client Young hooked into an unseen monster. The fish was much bigger than we the size we normally target, and the spool stayed empty after the first 2 runs, having to keep the boat in gear just to keep up with it. Young fought the fish valiantly for 45 minutes, but the fish easily sawed through our 130 pound leader, feeling no worse for the wear after it’s tame run in with our light jig stick, sporting a lip ring for a day or so until the hooks fell or rusted out…..dashing hopes to end the season on different note than it had started with the slow, difficult start back in May. Tuna are apex predators, and will humble even the best of fisherman on a regular basis. It is the challenge, and this humbling that keeps me and my anglers coming back for more. Time to cover up the Dusky, winterize the outboards, and watch the days tick off the 2013 calendar towards the month of May, when it starts anew. Happy Holidays to all! 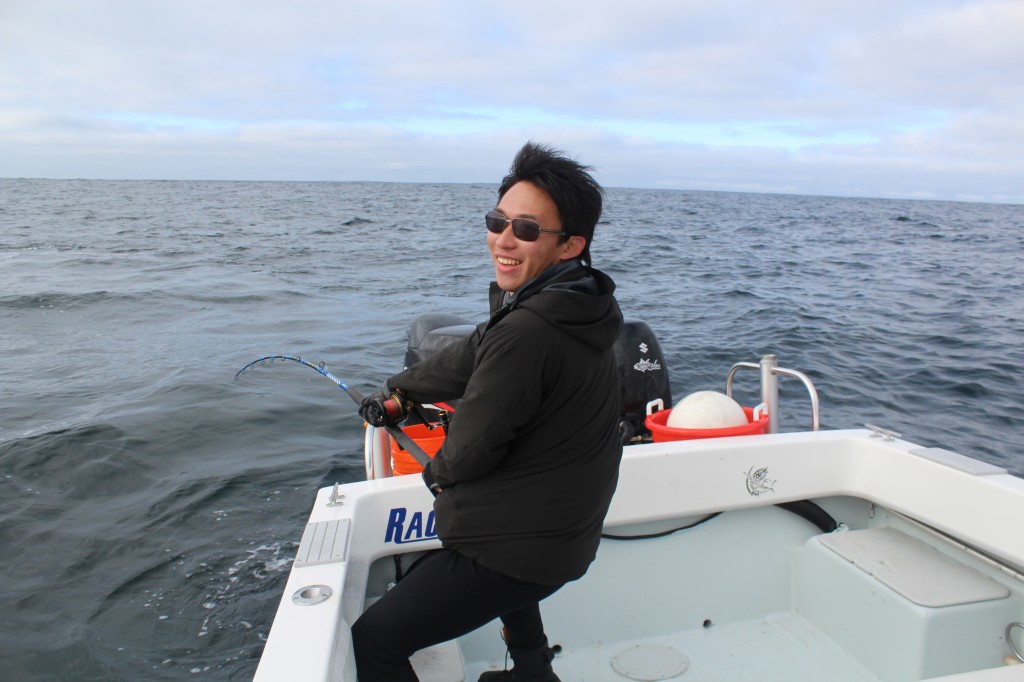 All smiles at the hook up, on a late season tuna trip aboard Coastal Charters Sportfishing.