Once the calendar rolls around to the end of October, the weather here in southern New England becomes the main player out on the fishing grounds. There become far fewer windows to leave the dock in search of tuna offshore, and often times with the cold and residual sloppy seas left over from fast moving and powerful low pressure systems we do fish in less than ideal conditions. Up until mid October of this season we had for the most part been blessed with very mild air and sea temperatures, and very little in the way of large storms. That all changed last week, with the landfall of  Sandy, a very large tropical system that slammed into the entire northeast coast of the US,  followed by another strong northeasterly storm just one week later. I was fortunate enough to have my Dusky up on trailer already, so was able to move my boat out of harm’s way. Many around me were not so lucky, as the storm took it’s toll on many marinas in this area. There was a brief weather window where we managed to sneak out, and we were greeted to slick calm conditions and unbelievable marine life. Vast pods of dolphin with piles of sea birds over them greeted us this amazing autumn day, but had zero signs of any feeding tuna mixed in with them. We played with the dolphin for quite some time, as they were very curious about the people aboard watching them swim around the boat. After some great photo opportunities, we reluctantly left our mammalian friends and headed off in search of some hungry bluefin. Remember the boat maintenance is very important after every boat trip you make to ensure that you keep it in a good shape. 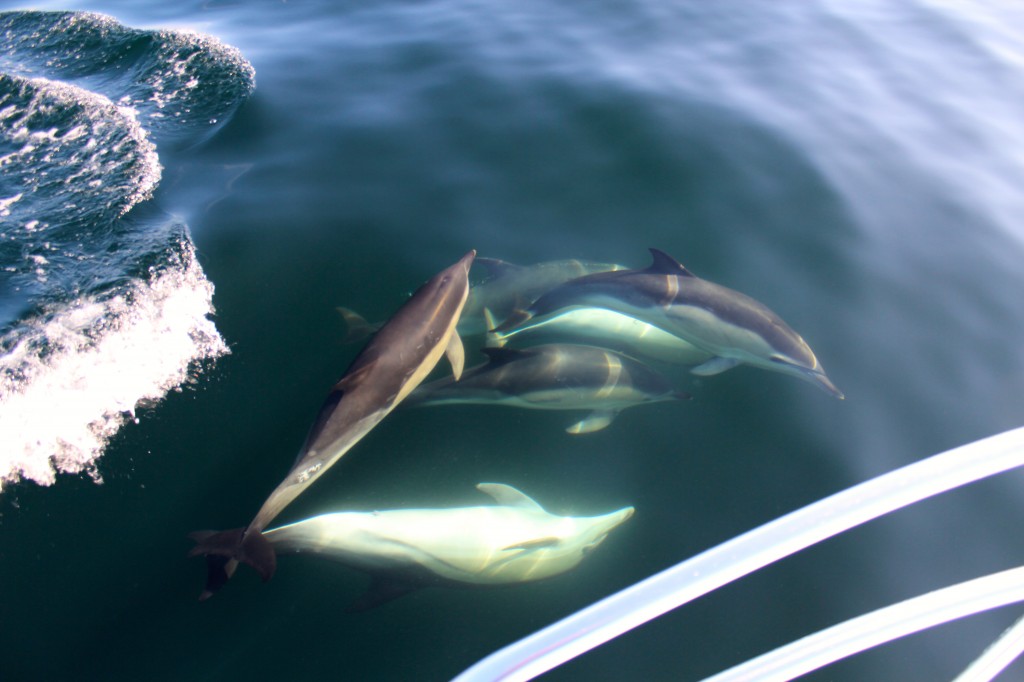 Still water is good for viewing marine mammals, but not so great for tuna fishing. Great visibility on a calm November morning aboard Coastal Charters Sportfishing.

The mackerel have shown back up in huge numbers, joined by many menhaden, shad, and herring which are coming out of the rivers and harbors where they lingered all spring and summer long. This creates a bounty of large, fat- packed forage meals for the bluefin tuna, and a great opportunity for anglers to score a fish on the jig. Dropping a slab of metal down and fooling a difficult predator like the bluefin tuna into committing on a strike has to be the ultimate challenge in fishing for pelagic species.  With the proverbial “calm before the storm” glass-slick water there would be very few if any signs of surface feeds of tuna, as both bait and predator prefer to stay deep when the visibility is so good. Once we located a good spot away from the rest of the fleet, we positioned the Dusky on drift and got the jigs moving through the water column. The bluefin were marking well on the sonar between 60-90 feet under the Dusky, and it didn’t take long before we were tight to a tuna. After a spirited battle, the bluefin was landed and iced down in the box for consumption later, and we reset on the same drift. The process was repeated with regularity, and we managed to land several more bluefin, all of which were tagged and released to fight another day. 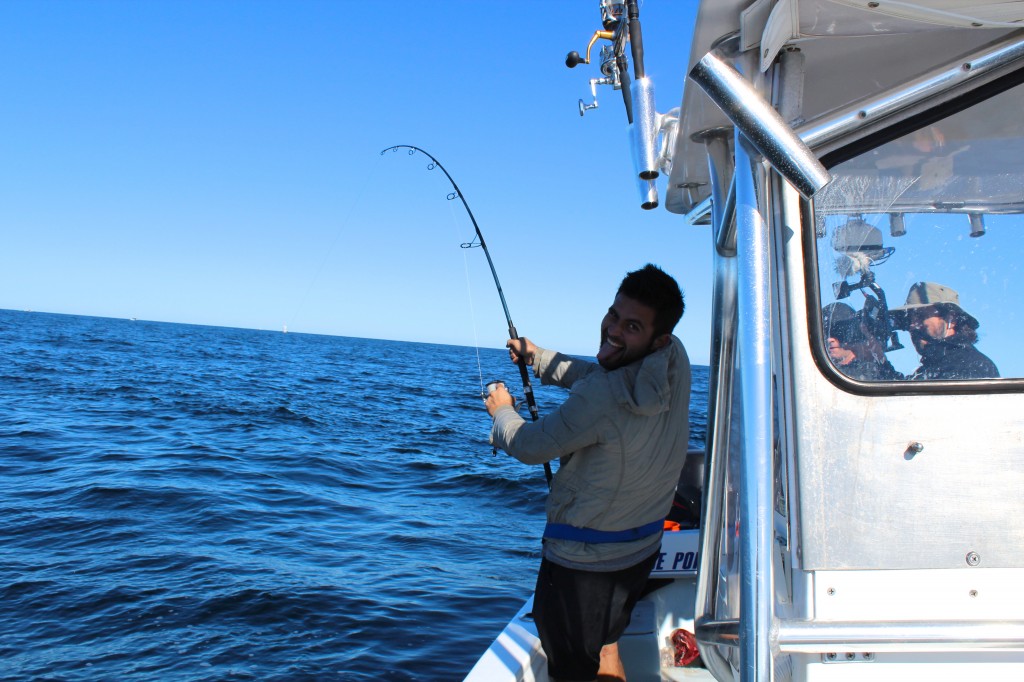 Another happy angler aboard Coastal Charters Sportfishing tight to a bluefin tuna off Cape Cod, MA. 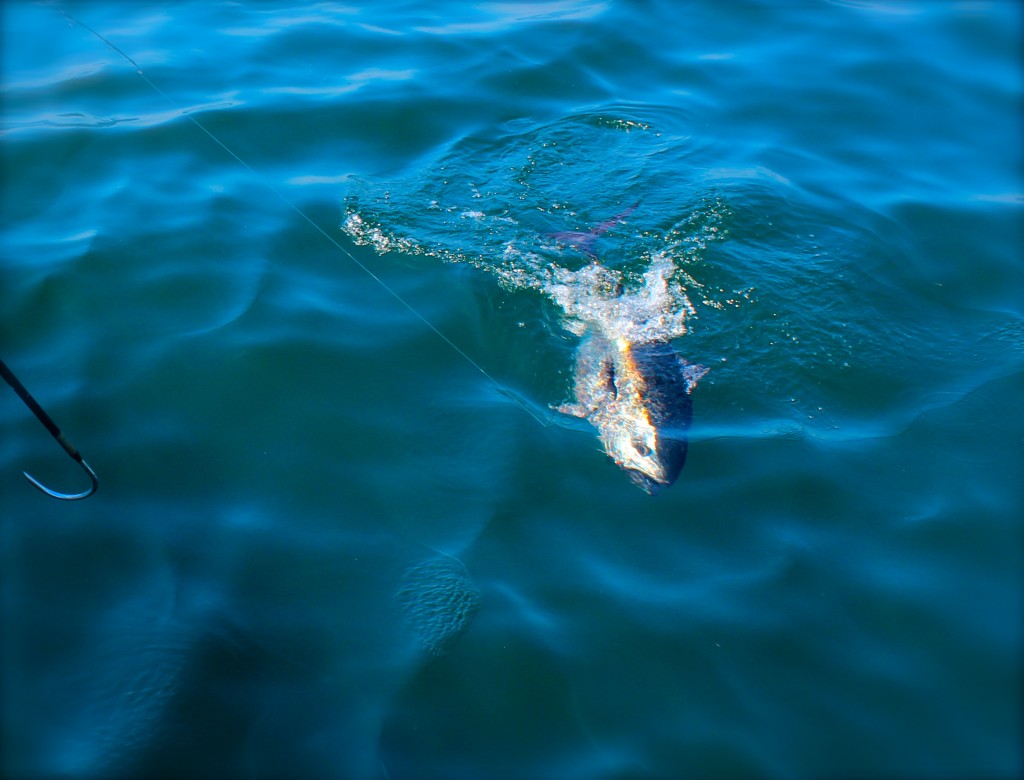 Bluefin tuna that was fooled by a jig about to be gaffed aboard Coastal Charters Sportfishing. 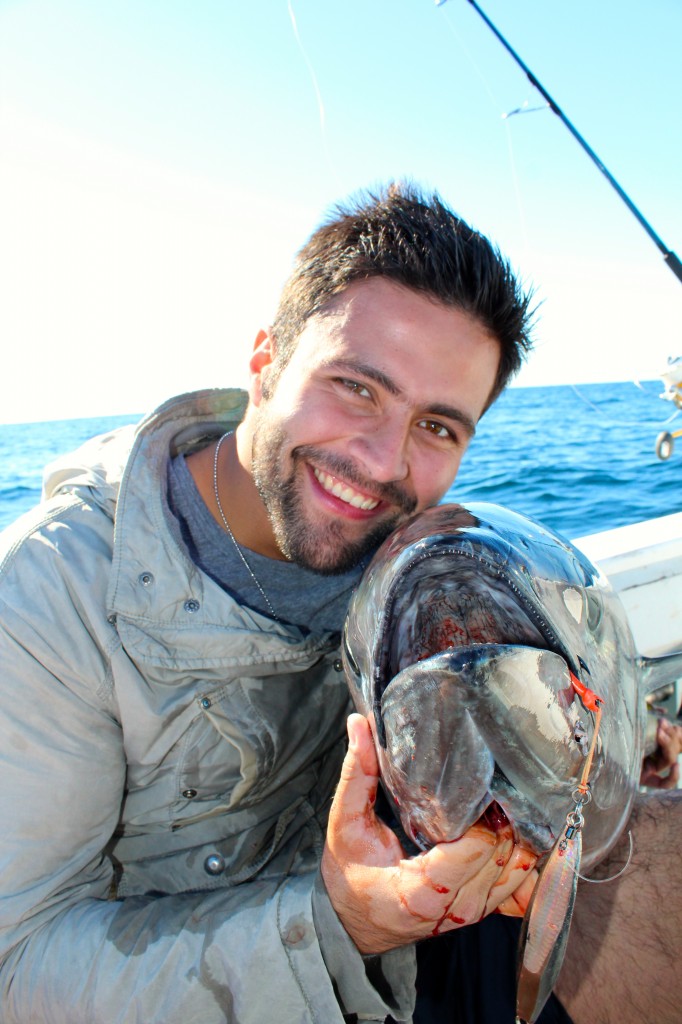 The results…a happy angler after landing a bluefin on a jig aboard Coastal Charters Sportfishing.

Days like this will be fewer and far between, as yet another system unleashes heavy winds and large waves throughout the fishing grounds. It takes several days minimum before the water settles enough to fish, sometimes more. There aren’t that many days left on the calendar before the bluefin disappear from these waters in search of more favorable winter waters.  Despite the challenging weather and very cold days, there are some intrepid anglers that refuse to give up and take advantage of the few breaks mother nature allows. I will have the Dusky fueled and ready, for at least until after Thanksgiving, hopefully longer. During this time to reflect on what we are grateful for in life, there are those who were not so fortunate to have escaped the wrath of the recent storms path. Please consider donating whatever you can in way of food, clothes, or monetary donations to those less comfortable and in need.  Thanks for checking out my content, and stay tuned for the next update, which hopefully includes more bluefin tuna action before it’s all over till next season!

Dusky 256 with custom bow rail, in the hunt for bluefin tuna in late October off Cape Cod, MA.